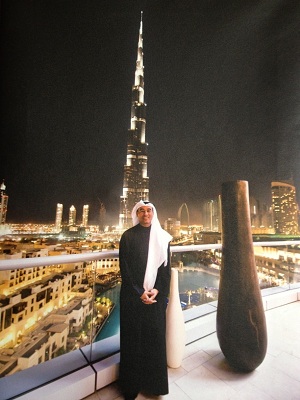 The World's tallest building. A living wonder. A Stunning work of art. An incomparable feat of engineering. Burj Khalifa is all that. In concept and execution, Burj Khalifa has no peer.

More than just the world's tallest building, Burj Khalifa is an unprecedented example of international cooperation, a symbolic beacon of progress, and an emblem of the new, dynamic and prosperous Middle East.

It is also tangible proof of Dubai's growing role in a changing world. In fewer than 30 years, this city has transformed itself from a regional centre to a global one. This success was not based on oil reserves, but on reserves of human talent, ingenuity and initiative. Burj Khalifa embodies that vision.

Emaar Properties PJSC is the Master Developer of Burj Khalifa and is also one of the largest real estate companies in the world.

Mr. Mohamed Alabbar, Chairman of Emaar Properties, said: "Burj Khalifa goes beyond its imposing physical specifications. In Burj Khalifa, we see the triumph of Dubai's vision of attaining the seemingly impossible and setting new benchmarks. It is a source of inspiration for every one of us at Emaar. The project is a declaration of the Emirate's capabilities and of the resolve of its leaders and people to work hand-in-hand on truly awe-inspiring projects.

Emaar had but one inspiration, the unflagging enthusiasm set in motion by His Highness Sheikh Mohammed Bin Rashid Al Maktoum, Vice President and Prime Minister of the UAE and Ruler of Dubai, who inspires us to reach for the stars.