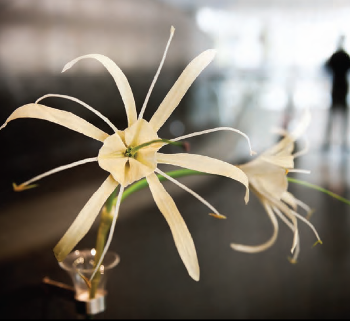 While it is superlative in every respect, it is the unique design of Burj Khalifa that truly sets it apart. The centrepiece of this new world capital attracted the world's most esteemed designers to an invited design competition.

Ultimately, the honour of designing the world's tallest tower was awarded to the global leader in creating ultra-tall structures, the Chicago office of Skidmore, Owings & Merrill LLP (SOM) with Adrian Smith FAIA, RIBA, consulting design partner. The selected design was subject to an extensive peer review program to confirm the safety and effectiveness of the structural systems.

The architecture features a triple-lobed footprint, an abstraction of the Hymenocallis flower. The tower is composed of three elements arranged around a central core. The modular, Y-shaped structure, with setbacks along each of its three wings, provides an inherently stable configuration for the structure and provides good floor plates for residential. Twenty-six helical levels decrease the cross-section of the tower incrementally as it spirals skyward.

The central core emerges at the top and culminates in a sculpted spire. A Y-shaped floor plan maximizes views of the Arabian Gulf. Viewed from the base or the air, Burj Khalifa is evocative of the onion domes prevalent in Islamic architecture.

Over 40 wind tunnel tests were conducted on Burj Khalifa to examine the effects the wind would have on the tower and its occupants. These ranged from initial tests to verify the wind climate of Dubai, to large structural analysis models and facade pressure tests, to micro-climate analysis of the effects at terraces and around the tower base. Even the temporary conditions during the construction stage were tested with the tower cranes on the tower to ensure safety at all times.

Stack effect or chimney effect is a phenomenon that affects super-tall building design and arises from the changes in pressure and temperature with height. Special studies were carried on Burj Khalifa to determine the magnitude of the changes that would have to be dealt with in the building design.

Concourse level to level 8 and level 38 and 39 will feature the Armani Hotel Dubai. Levels 9 to 16 will exclusively house luxurious one and two-bedroom Armani Residences.

Floors 45 through 108 are private ultra-luxury residences. The Corporate Suites occupy most of the remaining floors, except for level 122 which houses At.mosphere and level 124, the tower's public observatory, At the Top, Burj Khalifa.

For the convenience of homeowners, the tower has been divided into sections with exclusive Sky Lobbies on Levels 43, 76 and 123 that feature state-of-the-art fitness facilities including a Jacuzzis on Level 43 and 76. The Sky Lobbies on 43 and 76 additionally house swimming pools and a recreational room each that can be utilized for gatherings and lifestyle events — offering an unparalleled experience, both pools open to the outside offering residents the option of swimming from inside to the outside balcony.

Other facilities for residents include a Residents' Library, and Lafayette Gourmet, a gourmet convenience store and a meeting place for the residents. Valet parking is provided for guests and visitors.

The interior design of Burj Khalifa public areas was also done by the Chicago office of Skidmore, Owings & Merrill LLP and was led by award-winning designer Nada Andric. It features glass, stainless steel and polished dark stones, together with silver travertine flooring, Venetian stucco walls, handmade rugs and stone flooring. The interiors were inspired by local culture while staying mindful of the building's status as a global icon and residence.

Over 1,000 pieces of art from prominent Middle Eastern and international artists adorn Burj Khalifa and the surrounding Mohammed Bin Rashid Boulevard. Many of the pieces were specially commissioned by Emaar to be a tribute to the spirit of global harmony. The pieces were selected as a means of linking cultures and communities, symbolic of Burj Khalifa being an international collaboration.

The exterior cladding of Burj Khalifa began in May 2007 and was completed in September 2009. The vast project involved more than 380 skilled engineers and on-site technicians. At the initial stage of installation, the team progressed at the rate of about 20 to 30 panels per day and eventually achieved as many as 175 panels per day.

The tower accomplished a world record for the highest installation of an aluminium and glass façade with a height of 512 metres. The total weight of aluminium used on Burj Khalifa is equivalent to that of five A380 aircrafts and the total length of stainless steel bull nose fins is 293 times the height of Eiffel Tower in Paris.

In November 2007, the highest reinforced concrete core walls were pumped using 80 MPa concrete from ground level. A vertical height of 601 metres. This smashed the previous pumping record on a building of 470m on Taipei 101; the world’s second tallest tower and the previous world record for vertical pumping of 532 metres for an extension to the Riva del Garda Hydroelectric Power Plant in 1994. The concrete pressure during pumping to this level was nearly 200 bars.

The amount of rebar used for the tower is 31,400 metric tons - laid end to end this would extend over a quarter of the way around the world.